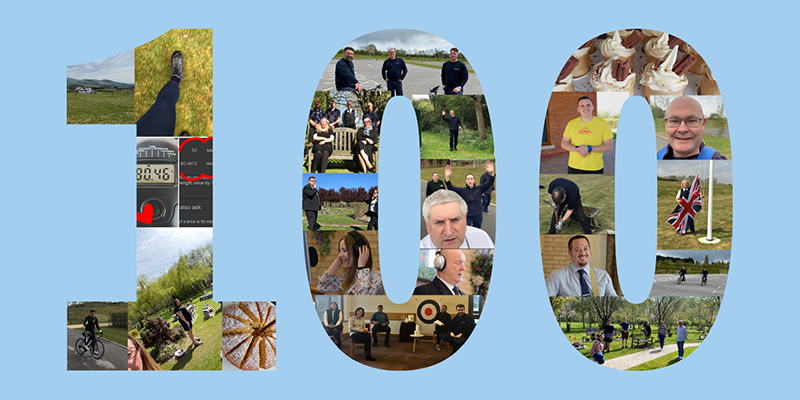 Teams from Westerleigh Group’s crematoria walked a total of 1,000 miles to raise more than £3,500 in honour of pandemic hero Captain Sir Tom Moore to mark what would have been his 101st birthday at the end of April.

Westerleigh Group, the UK’s largest independent owner and operator of crematoria and cemeteries, challenged teams at its 35 sites nationwide to do something to support the Captain Tom Foundation.

The Foundation supports organisations and charities which were close to Captain Tom’s heart, including those which help people with life limiting illnesses or who are facing or coping with bereavement.

This resonated with the values shared by Westerleigh Group and prompted its leadership team to throw down the gauntlet to its sites to come up with their own ideas for raising money.

Many crematoria chose to pay tribute to Captain Tom by following in his footsteps – quite literally!

Captain Tom captured the hearts of the nation by raising £38.9m for NHS charities by walking 100 laps of his Bedfordshire garden before his 100th birthday.

Many Westerleigh teams decided that the best way to honour him was to do something similar and walk 100 laps of their crematoria grounds.

Westerleigh Group set up a JustGiving page and encouraged anyone in the local communities who visit or use one of their crematoria to make a donation to support the efforts of the local staff.

Not all the sites chose to walk laps to raise money. A number of other activities also took place, including several sites organising cake and bake sales.

The site manager at Forest of Dean Crematorium turned to pedal power, covering 100 miles on an indoor bike at home in honour of Captain Tom.

The Team at Wessex Vale Crematorium hoisted a Union Jack flag on its new flagpole to mark how much money had been donated, and the team at Vale Royal Crematorium recorded their own version of You’ll Never Walk Alone, the song Captain Tom recorded with Michael Ball and which went to the top of the charts, earning Captain Tom a Guinness World Record for being the oldest performer to reach Number One.

The Group’s HR team also got in on the act, using the Strava exercise tracking app to log them walking or running 519 miles – the equivalent distance between Westerleigh’s most northern site, Stirlingshire Crematorium – and most southern, Treswithian Downs in Cornwall.

Roger Mclaughlan, Chief Executive Officer of Westerleigh Group, said: “We’re proud of the tremendous team spirit at all our crematoria, that’s been demonstrated once again by the way our teams have embraced the fundraising challenge.

“We’re grateful to our Funeral Directors and local communities for supporting our teams. We’re delighted to be able to donate more than £3,500 to the Captain Tom Foundation, as our tribute to a remarkable man who inspired so many people during such a difficult time.

“On a day-to-day basis, our teams provide exceptional care and support to people all over the country who are also facing difficult times.

“It’s been so rewarding for us to do something positive and raise money for some very worthy causes.”